Explore the 360º digital twin of the gallery from home:
https://my.matterport.com/show/?m=r1kFsx3vswA

In a culture awash in disposable objects and materiality, it is seemingly impossible to determine what has finally outlived its usefulness or nostalgic pull only to be relegated to storage, the thrift store, or finally, the landfill. This faded sentiment is just the beginning of the journey for this group of four artists who use their abilities to miraculously salvage fragments of tradition and culture that were destined to be lost, relegated to the periphery, or buried forever.

With a keen sense of wit and humor, German artist André Schulze adds a whimsical flourish to antique paintings and photographs, extending a story that began with another artist nearly a century ago. He scours thrift stores and private ads for antique German paintings in order to first restore and then paint directly on the canvas. A nondescript roadside hut is transformed into a Starbucks, or a stogy old man flipping through an old book in his cavernous library finds himself submerged in a rising tide of fish.

From her studio in L.A., artist Debra Broz morphs the dusty porcelain animals from an antique curio into wholly new hybrid creatures. At once hilarious and jarring, she deftly shatters and reassembles each figure to introduce duplicate limbs, heads, or tails. As if tampering with the DNA of an industrial porcelain workshop itself, the cross-species organisms appear wholly intentional and disturbingly cute.

U.K.-based ceramic artist Yurim Gough plumbs the powerful narrative depths of gender fluidity in this new series of nine vessels. The stoneware bowls depict a series of men in ornate clothes and audacious costumes with elements influenced by queer culture, showing that aspects of tradition and history can be celebrated while acknowledging that gender stereotypes have outlived their usefulness. Gough frequently grapples with identity and expression, be it through self-portraiture or examining Asian culture as depicted with ceramic pencil, transfers, gold, thread, and other materials.

RAIR (Recycled Artist in Residency Program) exists inside a construction and demolition waste recycling company in northeast Philadelphia. Amidst a torrential flow of trash and recyclables, artists are provided studio space and given the freedom to siphon off needed materials and artifacts to help realize their work. For this exhibition, RAIR has contributed a selection of work from their “Trash Boutique” which is a term used to describe the variety of objects, both made and found, at the recycling center that are recontextualized and presented as artwork for sale to aid in the organization's fundraising efforts.

Salvage will be on display from January 22, 2021 through February 20, 2021. If you are interested in seeing the full catalog of artwork for the exhibition when it is available, please email info@paradigm-gallery.com 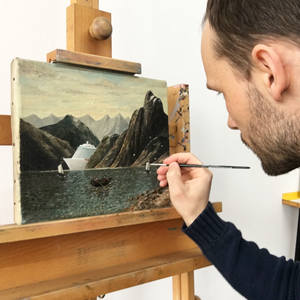 About André Schulze
André Schulze is an artist from Dresden, Germany who specializes in the restoration and remodeling of old paintings. In his Vintage Series, with subtle humor and attention to detail, he modifies paintings from the 1900-1950s and relocates the worlds in the paintings to our present moment, painting over the vintage artwork with contemporary imagery. About Yurim Gough
Yurim Gough is a British-based artist, originally from South Korea. After emigrating to England in 2007, she returned to art after a decade long career designing high-heeled shoes in Seoul, Tokyo and London. Starting with life-drawing she found herself drawn to her cultural roots in the form of ceramics. About Debra Broz
Debra Broz began her love affair with unusual things while growing up in rural central Missouri. In her art practice, Broz collects and deconstructs secondhand ceramic figurines, then seamlessly combines them into reimagined versions of their former selves. Broz received her BFA from Maryville University - St. Louis in 2003. Shortly thereafter, she moved to Austin, Texas where she trained as a ceramics restorer, learning the techniques that would become the basis for much of her future artwork. She currently lives in Los Angeles where she is an artist, ceramics restorer, and member of curatorial projects Monte Vista Projects and Gallery Also. About RAIR
RAIR (Recycled Artist In Residency) is a non-profit arts organization uniquely situated within a construction and demolition recycling center in Northeast Philadelphia. RAR’s mission is to challenge the perception of waste culture by providing a unique platform for artists at the intersection of art and industry. About the curator, Christopher Jobson
Deeply fascinated by contemporary art and visual culture, Christopher launched Colossal as a personal blog in the fall of 2010 to catalogue the work of both established and emerging artists across a wide-range of artistic disciplines. The site attracted millions of monthly readers seemingly overnight, and within two years he was able to quit his day job to publish full-time and also opened a fun design shop. Colossal is the recipient of the Utne Media Award for arts coverage, a Webby Award nomination, and has received accolades from the National Endowment for the Arts and PBS Art21. Called the "Tate Modern of the Internet," Colossal now has multiple regular contributors and is committed to making art accessible to everyone, exploring street art, design, photography, illustration, and craft from all reaches of the globe. You can find him on Instagram and on his website. About Paradigm
Paradigm Gallery + Studio® exhibits contemporary artwork from around the world with a focus on Philadelphia-based artists. Established February 2010, the gallery began as a project between co-founders and curators, Jason Chen and Sara McCorriston, as a space in which to create artwork, to exhibit the work of their peers, and to invite the members of the community to create and collect in a welcoming gallery setting. To this day the gallery still aims to welcome all collectors, from first time to lifelong, and continues to support accessible work that welcomes a wide audience.